Perhaps the most common question we get from our legally-ordained ministers regards the brick wall that is put up to block them from serving as Marriage Officiants in some cities and counties in Virginia – but, frustratingly, not by all of them. 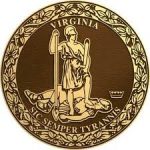 Over the years, it has been very much hit-or-miss for ceremonial ministers serving in Virginia – not just for our church, but for many others as well.

Some states require ministers to register prior to performing a ceremony there, but it’s usually a simple, hassle-free procedure and, usually, the registering authority works with you to expedite the process.

And then there is the magnificent and sovereign Commonwealth of Virginia.

No other state has laws and regulations quite like Virginia when it comes to who can and cannot perform marriage ceremonies in the Commonwealth.

Most states have a simple requirement that you must be legally ordained and in good standing with your church or religious organization, but not Virginia, which regularly requires ministers to undergo a religious litmus test at the courthouse before being granted permission.

It’s a monumental waste of time and taxpayer dollars, in addition to being a clear and obvious violation of your First Amendment rights.

Worse, it’s not every county every time. Some counties will just wave you through, while others will make you jump through hoop after hoop after hoop. Which counties?

That’s a good question, because sometimes a clerk or judge will look at your credentials and give you approval … while another clerk or judge in the same county will turn you down.

One of the most common reasons for rejection in Virginia that we’ve heard is because the Commonwealth does not recognize “online ordination.”

Here are two things to keep in mind:

First, if you are a First Nation ceremonial minister, you were NOT ordained online. You may have found us through our website, but your ordination was not granted by a website. Under the church’s own bylaws, and in complete compliance with Virginia statutes, your request for ordination was processed by a real, live human being, and was reviewed for approval by at least one member of the church’s board.

This is not an instant or automatic process, as is the case with certain organizations that let you click a button on their website to print out a “certificate” with your name on it — or, sometimes, just a blank document you fill in yourself.

Second, and more importantly, Virginia provides a specific law which permits any legally-ordained person to perform marriage ceremonies in the Commonwealth.

“No marriage solemnized under a license issued in this Commonwealth by any person professing to be authorized to solemnize the same shall be deemed or adjudged to be void, nor shall the validity thereof be in any way affected on account of any want of authority in such person, or any defect, omission or imperfection in such license, if the marriage be in all other respects lawful, and be consummated with a full belief on the part of the persons so married, or either of them, that they have been lawfully joined in marriage.”

What does this mean? Quite simply, if the ceremonial minister is legally and lawfully ordained (which First Nation ministers are, in accordance with Virginia law) and if the bridal couple accepts him or her as their Officiant to solemnize their marriage license, then the marriage is completely legal in the eyes of the Commonwealth.

This law specifically precludes any legally-ordained minister of any religious faith from the requirement to fill out a lengthy questionnaire concerning his or her private life and clerical practice.

If you have had your credentials rejected by any court or agency in Virginia, please let us know what city or county this occurred in, the name of the clerk or judge that denied you the right to perform the ceremony, and any other information specific to your situation.

We will pass the information along to the church’s counsel, which will contact them on your behalf for prompt resolution. (There’s a handy form you can use to get in touch with us, just below this article.)